Origin of the Salsa

About the origin of the salsa there are many versions. Its origin goes back to the 50s... ...Some people say that it is of Cuban origin and that it had to do with the political problem of Cuba; but other historians deny this and say that the origin is Porto Rican but again other Latinos disagree since the salsa is a social product in which the different musical cultures that exist in the Caribbean are intervened: it is the combination of the different African rhythms to the music of our different Caribbean regions: the merenge, the cumbia, the porro, the chachacha and many musical airs that were combined and gave first cause to the bugaloo. This dance is the  pure essence

of the salsa performed by Wilie Colon, Daniel Santos who is the biggest sonero, Celia Cruz, Bobby Capo, the Sonora Matancera that is the mother of the salsa at the end of the fifties and many others. In the opinion of many Latinos its homeland is the Caribbean without it having originated in one particular country. The salsa is a music that combines the Caribbean essence with the exceptional skill of black people who relate the love between the white people and the black people; the mulattos and all Caribbean people that have been so fortunate to have been born on this earth, which is so pretty and warm in a setting near the sea which the majestic waves are a constant inspiration for their dancers and are imitated in their rhythmic and undulant way of dancing. Generally speaking, that is what salsa is to many Latinos and whatever version is told about its origin they all are a translation of that original feeling: fue en el año 1600 cuando el tirano mando----that is for all the salseros the pure expression of the salsa.

In the beginning the salsa was criticized to be music coming from the poor people. Its impact in the whole Caribbean and New York was resounding (from the ends of the 60s beginning of the 70). The word SALSA became official through a movie and between the 64 and the 70´s the commercial and musical bases of the record house FANIA were established. In 1966 the Fania began to hire such artists as: Larry Harlow; Bobby Valentine and others. In 1967 they hired Ray Barreto, who added the kettledrum to the traditional percussion of bongo and tumbadora, Willie Colon who was 15 years old at that time and Hector Lavoe. At the beginning of the 70s they hired Roberto Roena and their Apollo Sound band where the saxophone was included.

What we call the Americanisation (USA) of the salsa was intensified in 73 when the Fania released the disk from the Fania all stars and its producer Massuci tried to dissociate the salsa of the Caribbean (multi-ethnic) in a second movie and tried to associate it only to the black slaves from America (united states) and the Caribbean. The message was that the salsa was born in the United States and that didn't have bonds with the Caribbean. The purpose of the managers was to sell the salsa to the public as an American product, which did not have the expected success since everybody knew that its roots were Afro-Caribbean. This music was quickly assumed to be the very own music of the poor communities in the big cities of the Caribbean like: Caracas, Cali; Panama's city and San Juan.

One of the song hits in that time was Mi gente interpreted by Hector Lavoe and Bemba Colora recorded by Celia Cruz with Tito Puente and at that moment was used to crown Celia as the musical queen of the company and of the Fania all stars.

People that feel the salsa dance it in many ways according to the feeling of each one of our towns, which even enriches the salsa more, and therefore there are so many different steps.

The Rueda de casino is a group of couples that dance anticlockwise, making a variety of complex movements, turns and multiple changes of couples that seem to be choreographies but technically are not. One person calls the name of a step, frequently changing partners around the circle. This is how the name “Rueda”, which means, “wheel” in Spanish was developed. The result is a fast paced, beautifully synchronized, exciting dance.

The origin of the Rueda de casino comes from the colonial influence of the Kingdom XIV Luis in France. It appeared in the ballets of the court and to obtain a good nobility title it was necessary to know certain of these choreographies, which were directed by a BASTONERO. This genre arrived in Cuba with the Haitians who had escaped their country taking with them their cultural tradition and making a new genre that mixed such dances as the French quadrille. This new genre was origin of the Danzón.

The danzon was the base of a new dance of French dances and Afro-Cuban indigenous dances like: Guaguanco, Yambú, Columbia.

The Rueda de casino appears in Cuba, between 1950 and 1956; in its beginnings it was not known as Rueda de casino but with such names as: MANIA, CASINO, THE CUBAN DANCE IN GROUP; according to the historians these denominations of the casino and the Rueda de casino, arose and they were executed by Cuban black poor, which could not aspire to belong to a social club of the city, but it is said that it was born in the most popular casinos in Cuba. Some affirm that the first time that this genre was seen was in the SPORT CASINO; other versions say that it was in the CASINO THE BEACH, CASINO SPANISH, but the common objective of all dancers was the meeting of people to improvise, to practise Rueda de casino and to dance in other clubs like THE TROPICAL one, GARDENS OF THE TROPICANA AND SECONDARY SCHOOL OF THE HAVANA. Prior to the revolution, Havana was the capital of the entertainment, nightlife, and great music. Dancers gathered in the casinos to dance to the rhythms of Benny Moré, Arsenio Rodriguez, Cachao, Enrique Jorrin, Orquesta Aragon, just to name a few.

It is believed that when the Cubans emigrated to the United States they decided to recapture some of these cultural manifestations and to impose them in this country with a big impact in Miami. But before this at the end of the 60s, something important happened in Cuba; the salsa was created and became strong, and the Rueda de casino became very popular and in 1970 the Rueda de casino became more famous in the Havana. The Rueda del oso was danced to the music of the Van Van by Juan Formell in traditional places at the SPORT CASINO, THE ROSY TROPICAL (SALON DE BENNY LIVES) and others.

The Rueda de casino became a social phenomenon that was adapted to a form of neighborhood dance, since each Rueda de casino had its favourite leader, its private figures and variants of voices; it was imposed at many parties and carnivals where the Rueda de casino who made the smaller number of mistakes, who had bigger grace and beauty would be the winner. 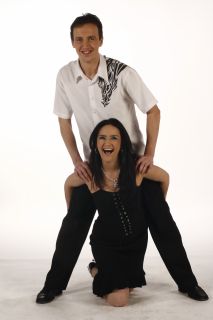